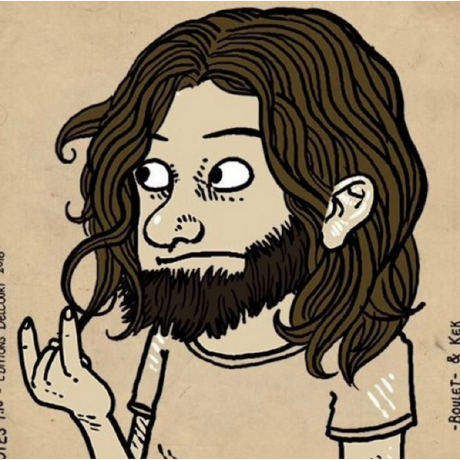 Malcom is a tool designed to analyze a system's network communication using graphical representations of network traffic, and cross-reference them with known malware sources. This comes handy when analyzing how certain malware species try to communicate with the outside world.

Malcom can help you:

The aim of Malcom is to make malware analysis and intel gathering faster by providing a human-readable version of network traffic originating from a given host or network. Convert network traffic information to actionable intelligence faster.

Check the wiki for a Quickstart with some nice screenshots and a tutorial on how to add your own feeds.

If you need some help, or want to contribute, feel free to join the mailing list or try to grab someone on IRC (#malcom on freenode.net, it's pretty quiet but there's always someone around). You can also hit me up on twitter @tomchop_ 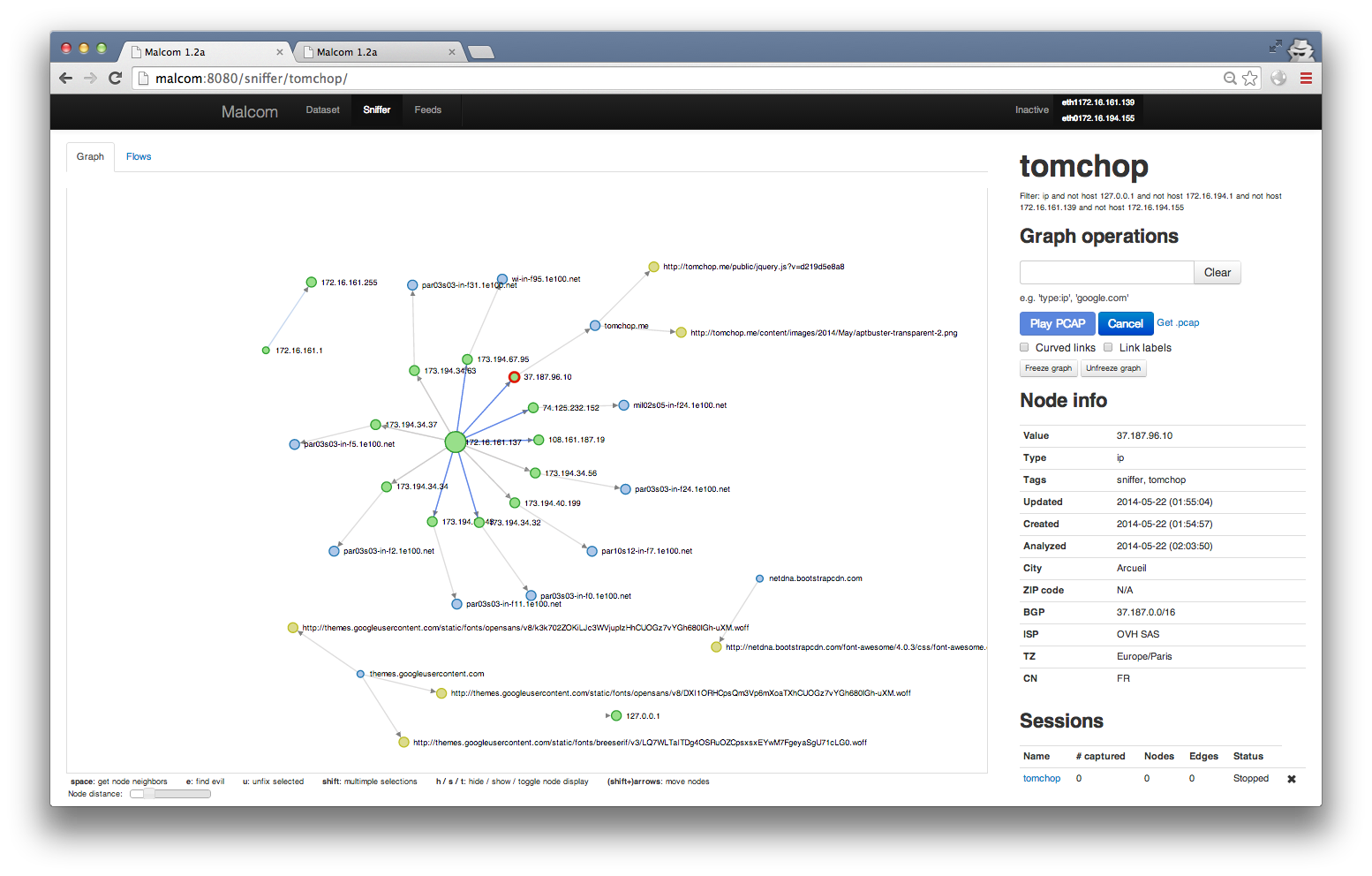 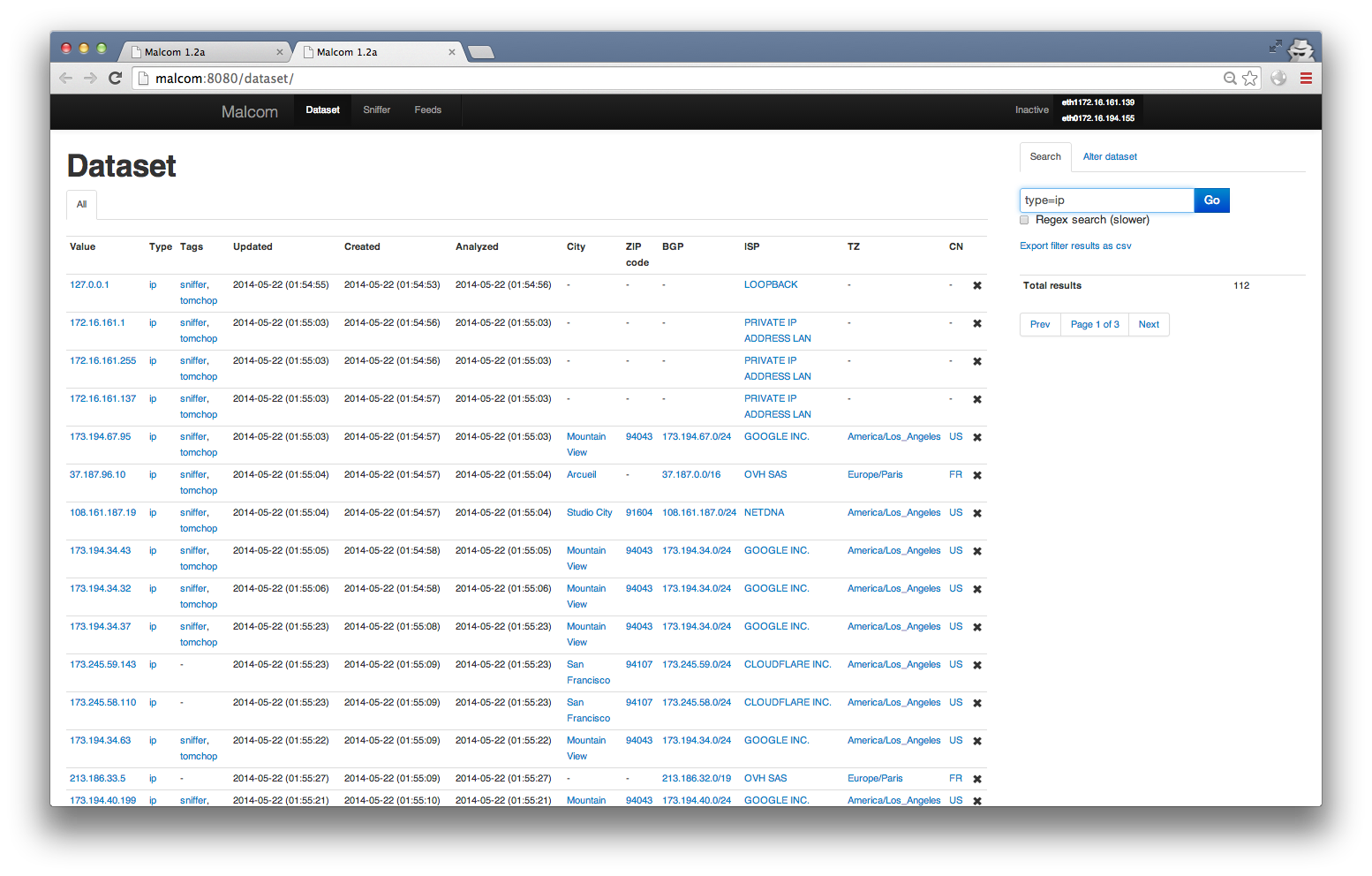 Malcom is written in python. Provided you have the necessary libraries, you should be able to run it on any platform. I highly recommend the use of python virtual environments (virtualenv) so as not to mess up your system libraries.

The following was tested on Ubuntu server 14.04 LTS:

By default, Malcom will try to connect to a local mongodb instance and create its own database, named malcom. If this is OK for you, you may skip the following steps. Otherwise, you need to edit the database section of your malcom.conf file.

Set an other name for your Malcom database

By default, Malcom will use a database named malcom. You can change this behavior by editing the malcom.conf file and setting the name directive from the database section to your liking.

By default, Malcom will try to connect to localhost, but your database may be on another server. To change this, just set the hosts directive. You may use hostnames or IPv4/v6 addresses (just keep in mind to enclose your IPv6 addresses between [ and ], e.g. [::1]).

If you'd like to use a standalone database on host my.mongo.server, just set:

You can also specify the port mongod is listening on by specifying it after the name/address of your server, separated with a :

If the user is not linked to the malcom database but to another one (for example the admin database for a admin user), you will have to set the authentication_database directive with the name of that database.

Case of a replica set

When using a replica set, you may need to ensure you are connected to the right one. For that, just add the replset directive to force the mongo driver to check the name of the replicaset

By default, Malcom will try to connect to the primary node of th replica set. You may need/want to change that. In order to change that behaviour, just set the read_preference directive. See the mongo documentation for more information.

The quickest way to get you started is to pull the Docker image from the public docker repo. To pull older, more stable Docker builds, use tomchop/malcom instead of tomchop/malcom-automatic.

Connecting to http://<docker_host>:8080/ should get you started.

Malcom now supports TLS interception. For this to work, you need to generate some keys in Malcom/networking/tlsproxy/keys. See the KEYS.md file there for more information on how to do this.

Make sure you also have IPtables (you already should) and permissions to do some port forwarding with it (you usually need to be root for that). You can to this using the convenient forward_port.sh script. For example, to intercept all TLS communications towards port 443, use forward_port.sh 443 9999. You'll then have to tell malcom to run an interception proxy on port 9999.

Expect this process to be automated in future releases.

Malcom was designed and tested on a Ubuntu Server 14.04 LTS VM.

If you're used to doing malware analysis, you probably already have tons of virtual machines running on a host OS. Just install Malcom on a new VM, and route your other VM's connections through Malcom. Use enable_routing.sh to activate routing / NATing on the VM Malcom is running on. You'll need to add an extra network card to the guest OS.

As long as it's getting layer-3 network data, Malcom can be deployed anywhere. Although it's not recommended to use it on high-availability networks (it wasn't designed to be fast, see disclaimer), you can have it running at the end of your switch's mirror port or on your gateway.

To launch an instance of Malcom that ONLY fetches information from feeds, run Malcom with the --feeds option or tweak the configuration file.

Your database should be populated automatically. If you can dig into the code, adding feeds is pretty straightforward (assuming you're generating Evil objects). You can find an example feed in /feeds/zeustracker. A more detailed tutorial is available here.

You can also use celery to run feeds. Make sure celery is installed by running $ pip install celery from your virtualenv. You can then use celery worker -E --config=celeryconfig --loglevel=DEBUG --concurrency=12 to launch the feeding process with 12 simultaneous workers.

Malcom was written mostly from scratch, in Python. It uses the following frameworks to work:

Collaboration - The main direction I want this tool to take is to become collaborative. I have a few ideas for this, and I think it will become 100x more useful once data sharing is implemented.

Extendability - The other thing I want to include in the tool is the ability to more easily extend it. I don't have the same needs as everyone else, and this tool was conceived having my needs in mind. You can now customize Malcom by adding new feeds.

Once collaboration and extension are up and running, I think this will be helpful for more than one incident responder out there. :-)

This tool was coded during my free time. Like a huge number of tools we download and use daily, I wouldn't recommend to use it on a production environment where data stability and reliability is a MUST.

It's in early stages of development, meaning it works for me. You're free to share it, improve it, ask for pull requests.

This program is free software: you can redistribute it and/or modify it under the terms of the GNU General Public License as published by the Free Software Foundation, either version 3 of the License, or (at your option) any later version.

This program is distributed in the hope that it will be useful, but WITHOUT ANY WARRANTY; without even the implied warranty of MERCHANTABILITY or FITNESS FOR A PARTICULAR PURPOSE. See the GNU General Public License for more details.

You should have received a copy of the GNU General Public License along with this program. If not, see http://www.gnu.org/licenses/.

Please note that Redis, MongoDB, d3js, Maximind and Bootstrap (and other third party libraries included in Malcom) may have their own GPL compatible licences.

Keep up with changes to malcom!

Leave a review for malcom

Would you tell us more about malcom?